Yesterday was very special for me. After several weeks of work in-and-out the Tiny House and months of design, conception, hesitations, doubts and faith, I’ve welcome my 2 daughters home. It was a precious moment. They explored our new space with a broad smile and looks of bewilderment. At first silent, they were capturing the wholeness of it. Then comments flew. “It’s beautiful Dad!”, “Wahoo, super clever this!”, “We already feel at home, we feel very well indeed!”. And then my elder daughter Lirio turned to me and asked: “Dad. Are you very pleased with yourself? is the Tiny House as you hoped it would be?”. And watching them already behaving as if we’ve always lived here, I definitely thought “Heck yes” 🙂

The appartment I lived in before, in that very same big tribe house I mentionned earlier in this serie, I designed it with the support and life-long experience of our architect, and the approval of my former partner/lover. My vision was wrapped around core principles, such as:

This appartment was a pure delight to live in, and also a pleasure to shoot video in too, as you can watch above, and I was kinda mortified to leave it. I wanted my Tiny House to resemble it and pack up all its ingredients in a small box. I’ve thus designed a tiny open space with slightly surprising angles, huge and numerous windows, very few walls or doors. But style. My style – like it or not 🙂

Here are the plans I first sketched now about a year ago.

And here is how it looks in real life. 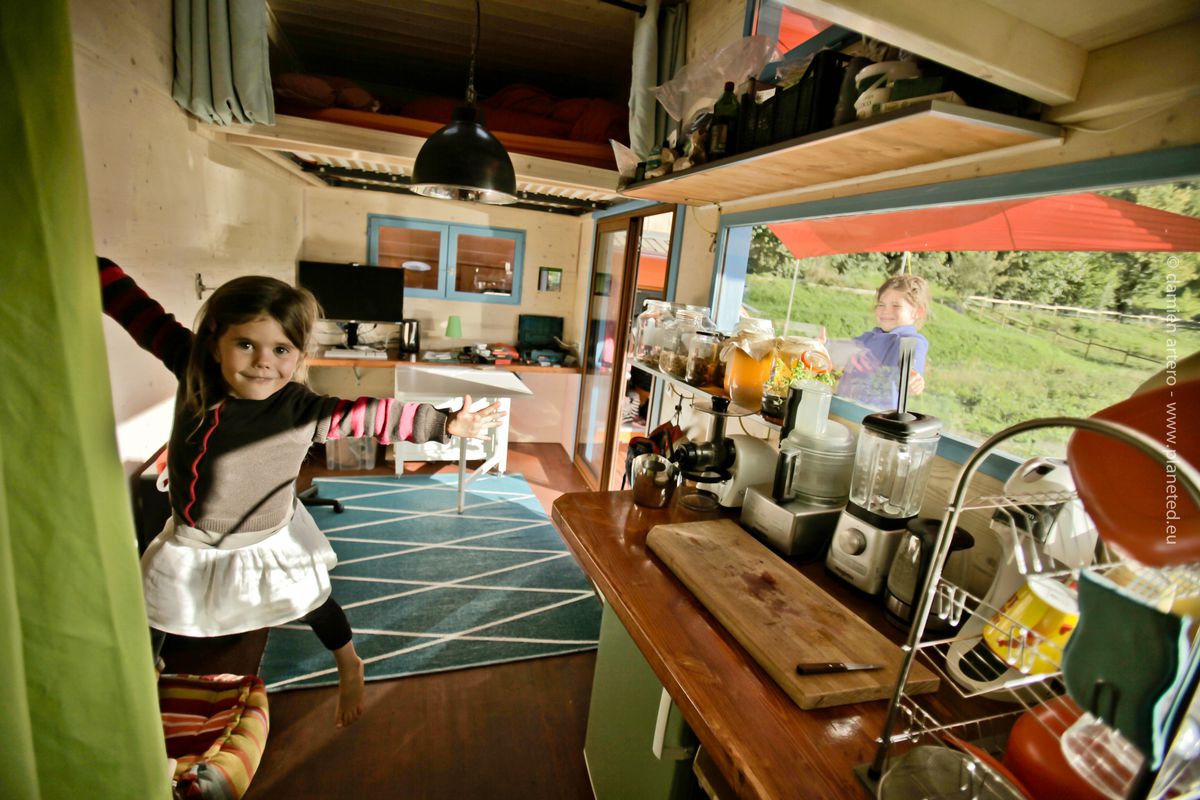 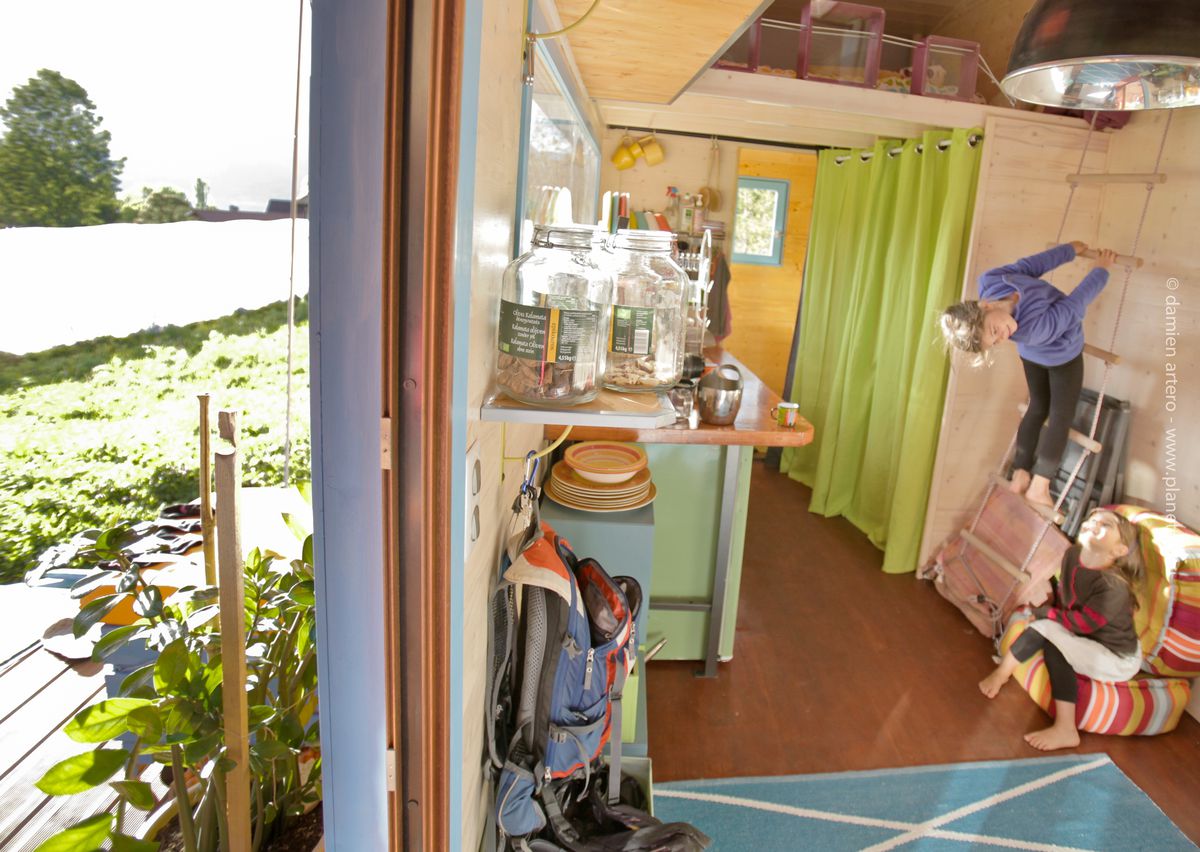 The stuff of it

How is it built? I don’t know quite. Wasn’t my job after all. My job was to design it and equip it, with the help of my dear friend Jean-Charles from “Les Racines Du Vivant”, and a bunch of other good folks who consumed their freetime to work on my new house with me, which still bewilders me – I’m forever so grateful people. And so are my kids. Love. 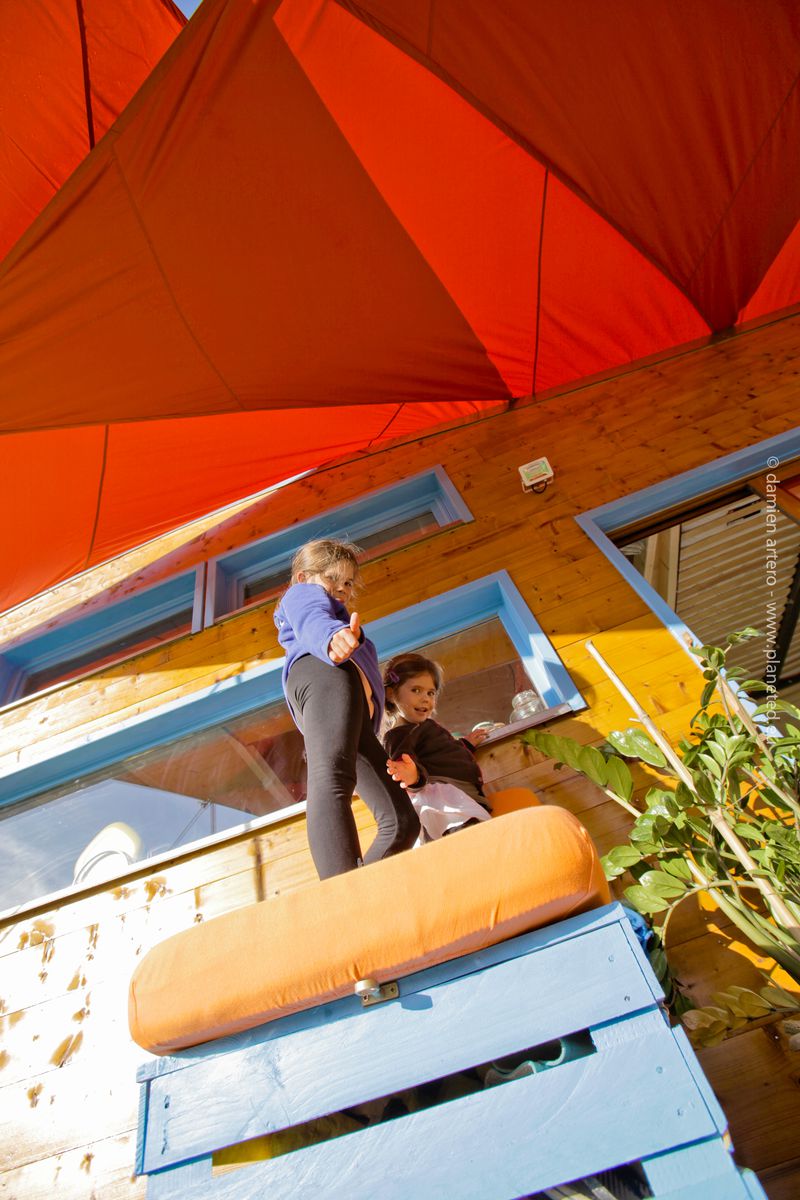 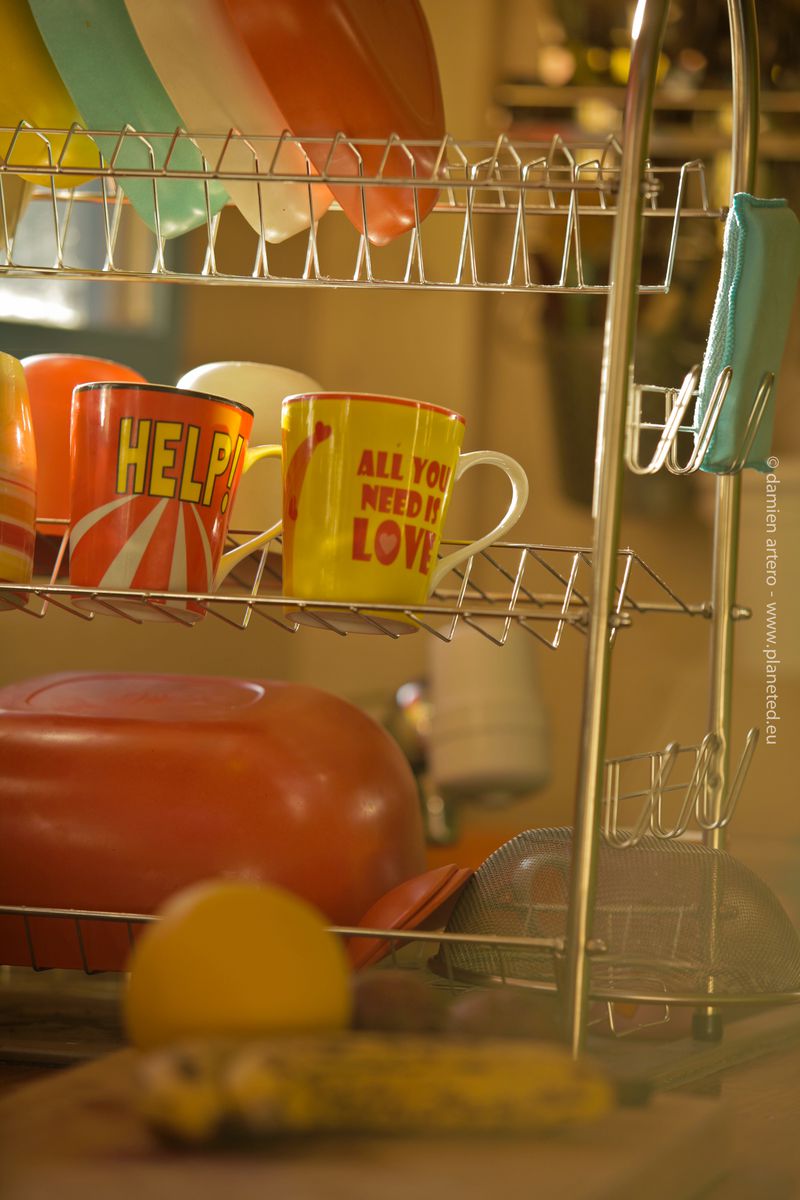 Well, back to Neverland: it’s made of wood, love and inspiration. Kinda.

Inspiration is something that never dries out with me, but I need the professional blokes to make things real. The main design was performed on Sketchup. Quickly enough. And – as always – a tad ambitious. But reality sticks to it, as we saw.

Then… The good guy behind the core construction is Jean-Maxime Gonzalez, woodman, carpenter, builder of funky huts and other alternative housing. He runs a small company composed of himself and called Nature Projet Bois – check out his Facebook page. He works well, knows his stuff, is opened to wishes and ideas yet able to warn me that I once again came up with a silly plan when that happens. And it does. But so far my ideas, once become real, look fine enough to me.

Yes indeed. Because my 2 daughters are with me 50% of the time minimum.

And because along the way, I met the most amazing woman, who not only totally won me over, but among many other super-attractive features, explained she already had the plan to maybe move into a Tiny House.

I told you so in the beginning of this serie: life’s amazing…

Like I said earlier, the design features no walls and very little furnitures (almost none), so I guess it works out well. For me. 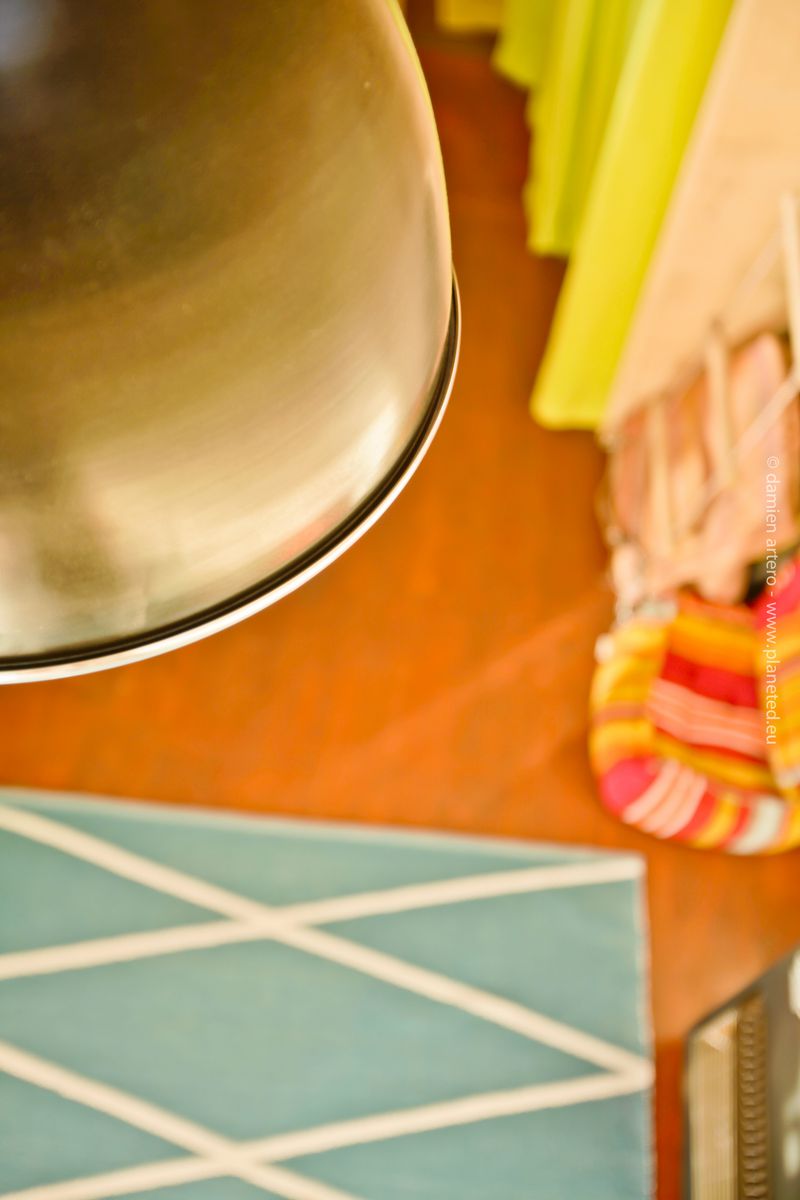 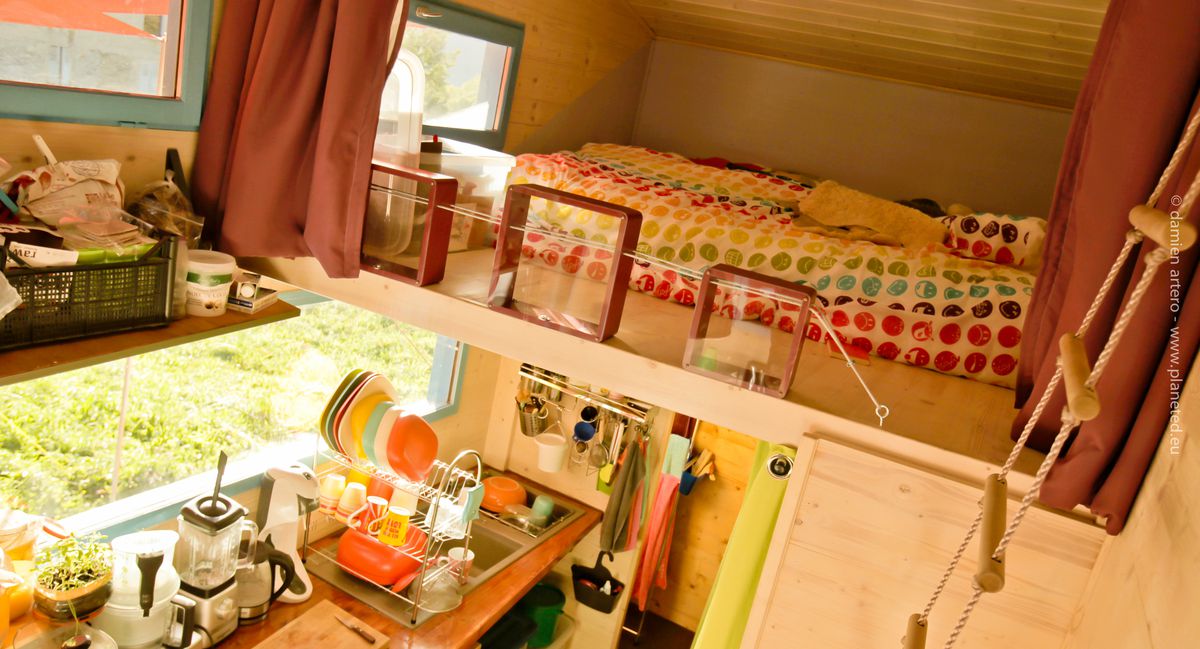 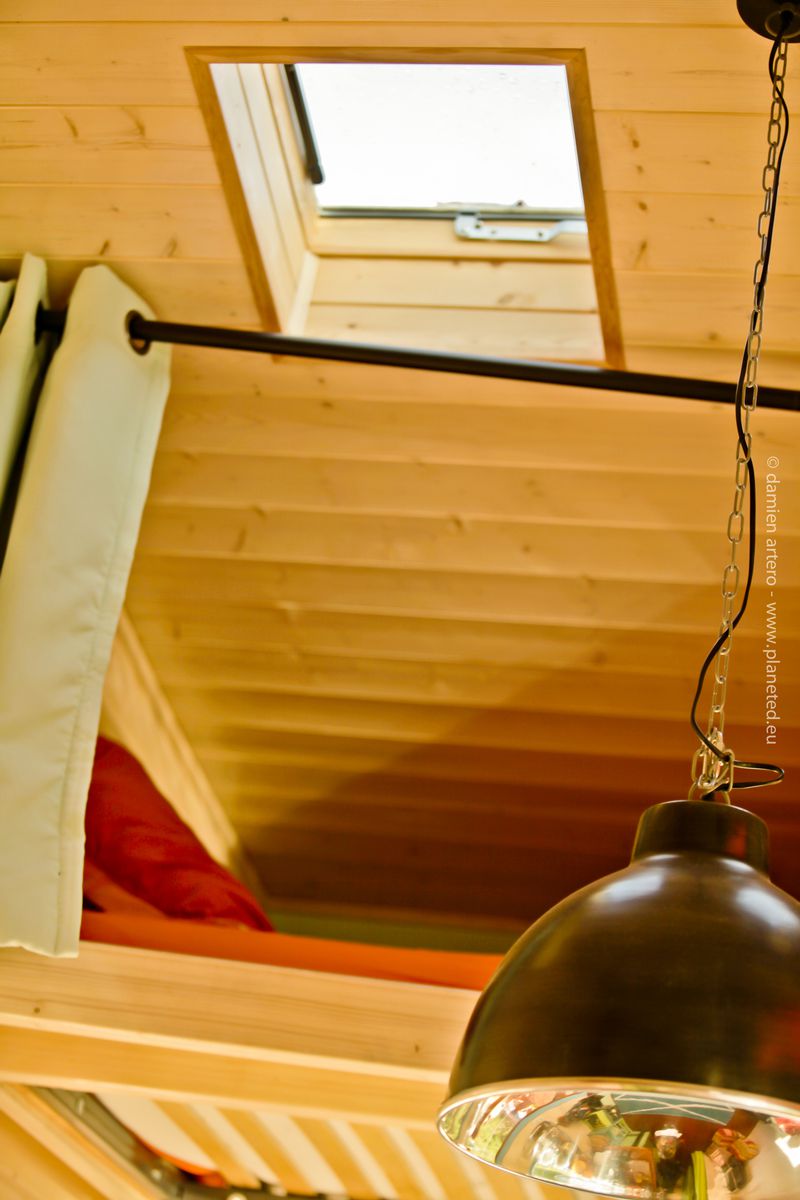 The wave-shaped roof allows for a nice feeling of height yet keeps it roomy for me to fit 2 sleeping spaces, one being for my 2 daughters – with extra space to play. We then comfortably sleep, the 4 of us, and simple curtains create some privacy. Of course, living in a Tiny House rewrite your whole perception of intimacy, but we’re used to tour around in a campervan so what the heck really? 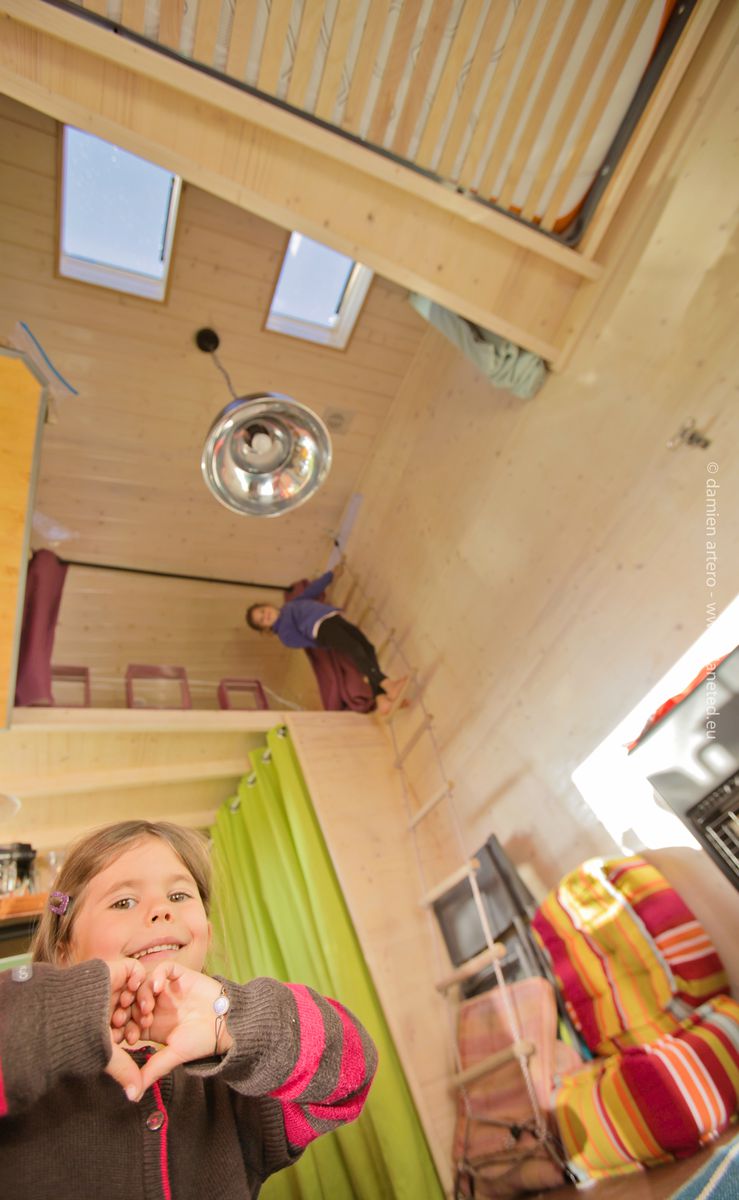 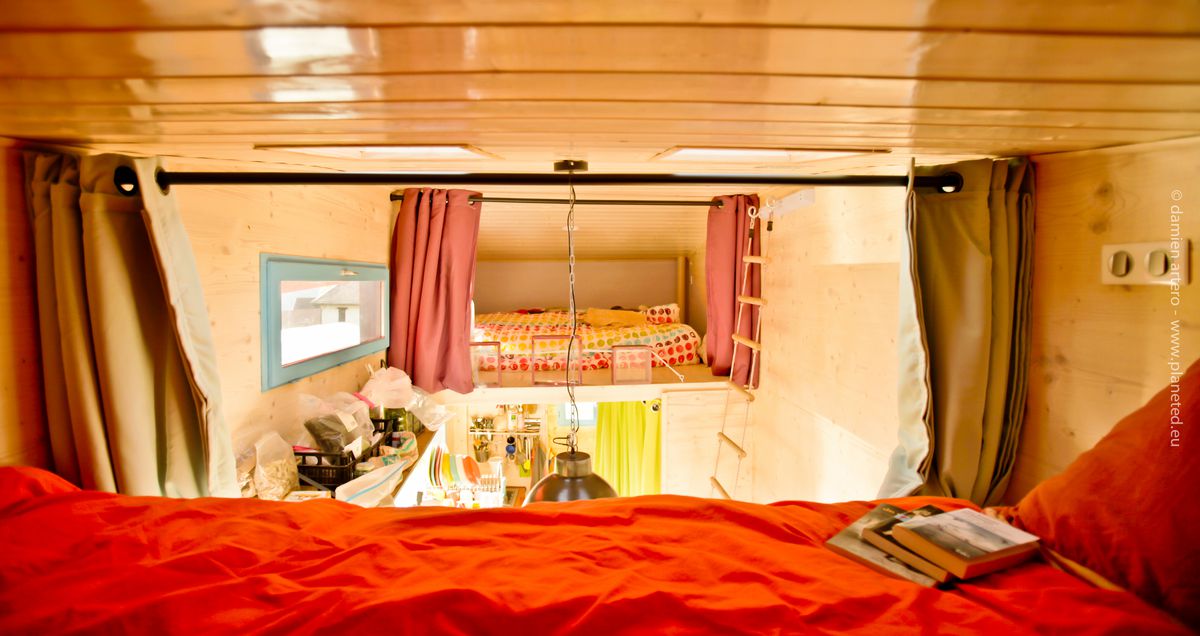 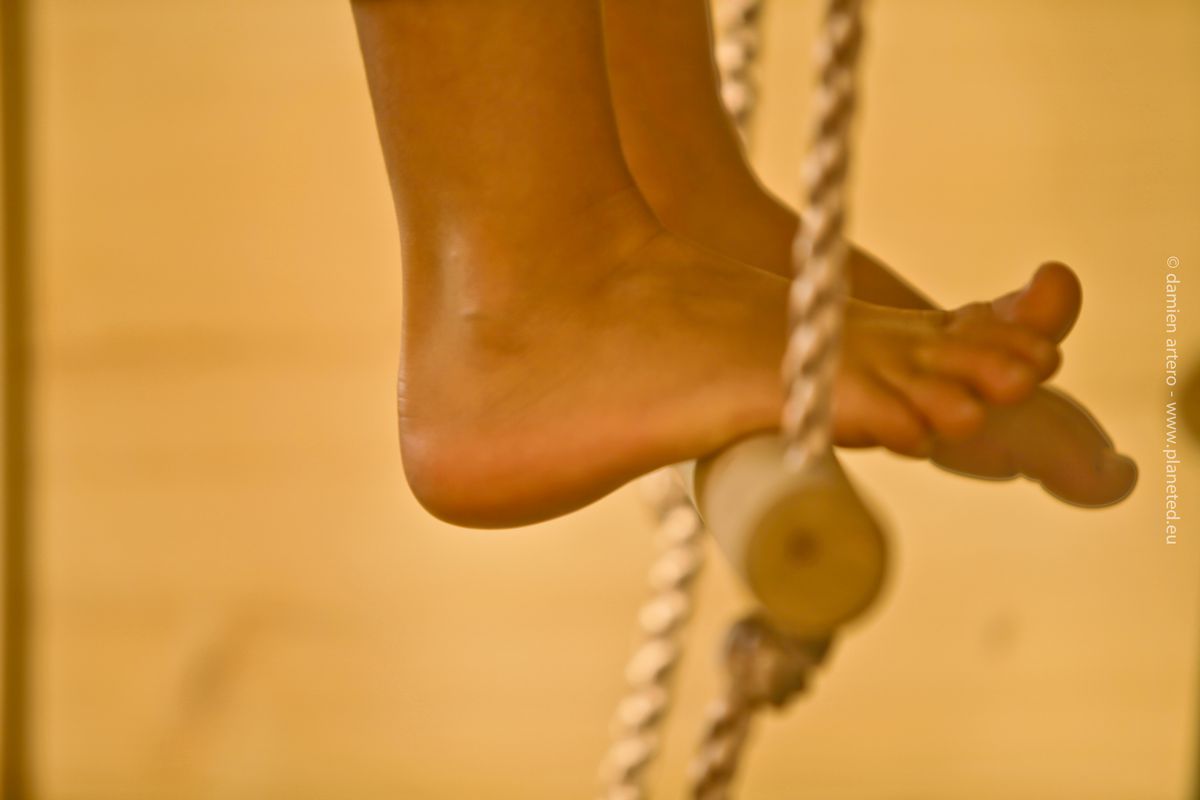 The feeling of inhabiting in a tiny House, especially as a family, already sets its mark on us. For me, it’s a bit like living in a boat docked somewhere up the mountains: it moves slightly with every motion we make. If I stand in the shower and the girls play in my bed, the tiny whispers their gestures to my feet. Add to this, the global wooden-touch and light/bright environment, and you get a very peculiar world to live in.

I like my shower floor big and trendy. Because it looks gorgeous, think I, and because it makes it a lot easier to grab my 2 kids and wash them from head to toes with little to no cleaning afterwards. Aesthetically, I like the fact that the shower bed creates a whole space that includes the toilet – it feels like our shower is a room in itself, and it’s kinda cool. 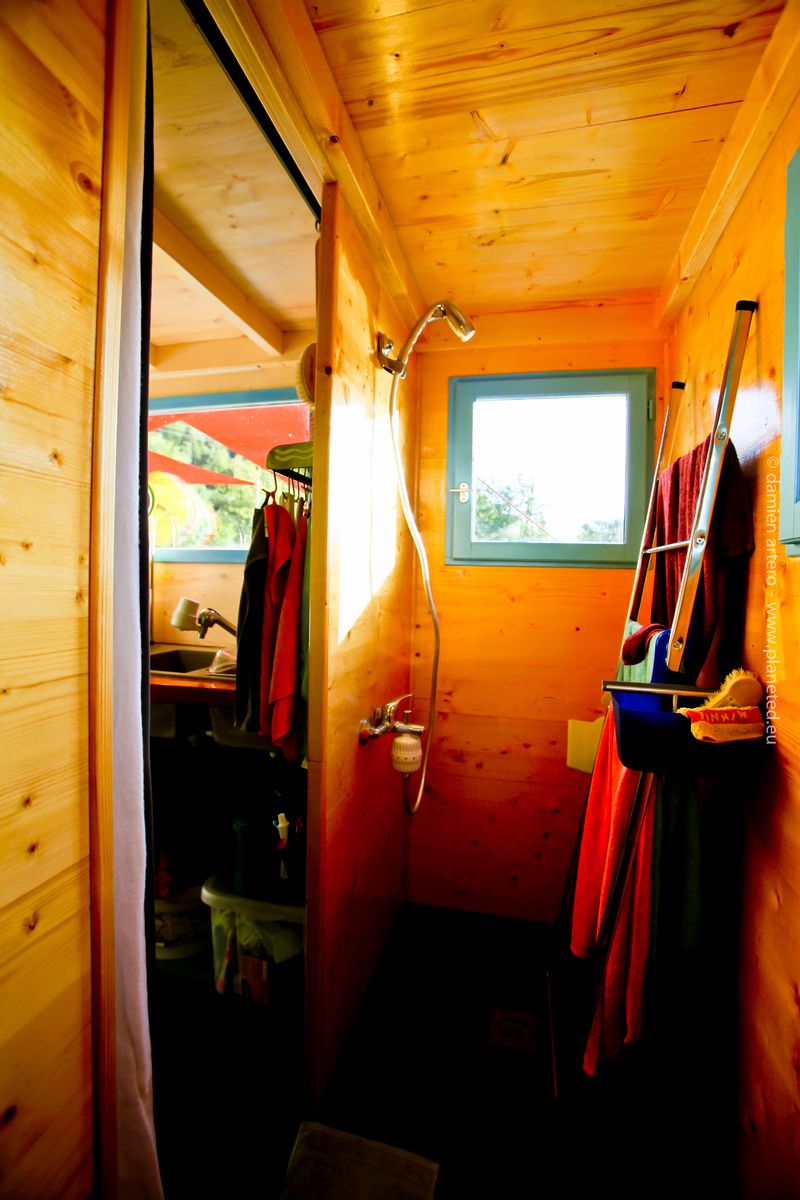 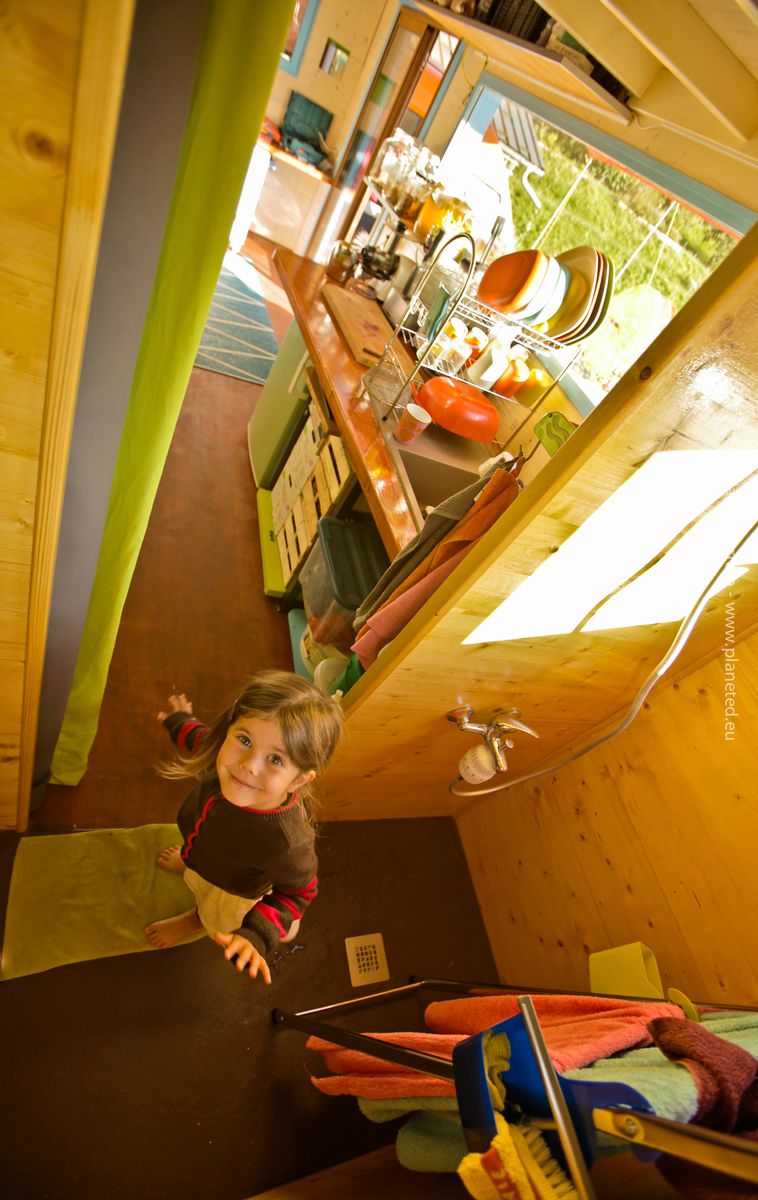 A dry, wooden simple and clever toilet of course. No waste of water. Once every week or so, I jog to the nearby forest with my case of fecès on my shoulder and discard the load in a big hole I’ve enjoyed digging on a brisk Sunday morning after crashing my knee into my campervan’s side door*.

* (Not all of this is true: jogging is out of question with a case of shit over your shoulder. Just be realistic people)

Get rid of the unnecessary

We’ve managed to build drawers and shelves around the electrical outlet and the solar-powered batteries but it’s small – it’s partly on wheels for easy access, but it’s small. The 4 of us need to select which clothes really are important instead of pilling up tshirts, dresses and sweaters we only were once in a while. As with living on a bicycle – as I have done for several years – or in a campervan – which is part of my routine too – I always noticed the less I own, the better I feel. It’s like with people: in a small group where you can adress everyone personally and maintain real individual contact, you feel good; among a crowd of so many persons that they all blend in a blurr and you can’t even start to identify them, how do you feel? Me, I feel dragged down and oppressed. Well one day I realised it was more or less the same with my belongings. To make them all fit in a backpack is one of the greatest sensations I know. Of course, I have to deal with all my professional equipment… but we’ll dig into that later on. 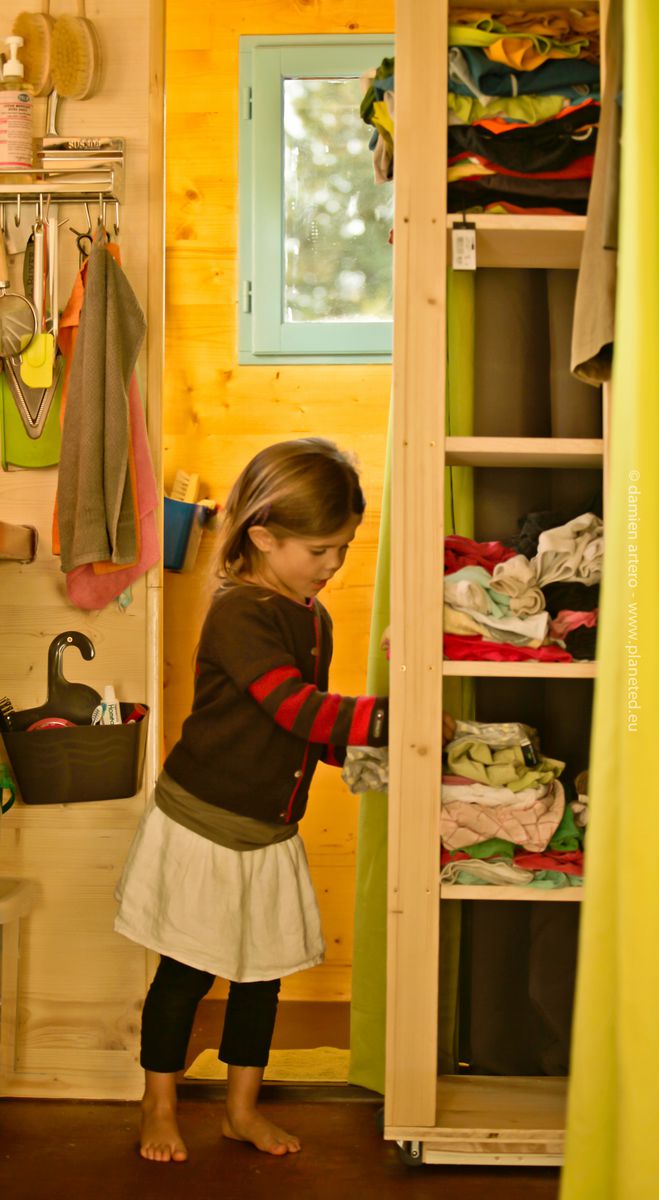 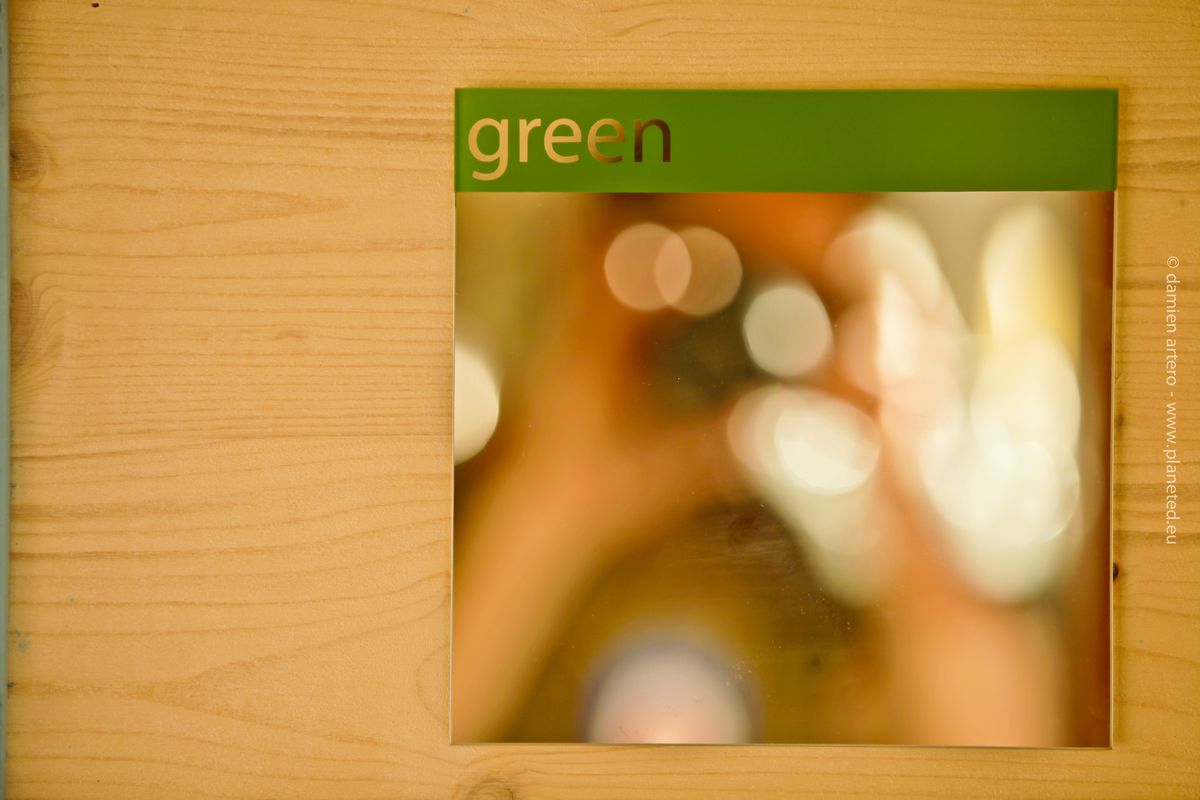 In rather the same spirit, I wanted the non-regular equipments to be hidden in a clever place. For instance, the cooking stove. I hardly need it, so I hid it in a drawer to use it occasionally. Fun. 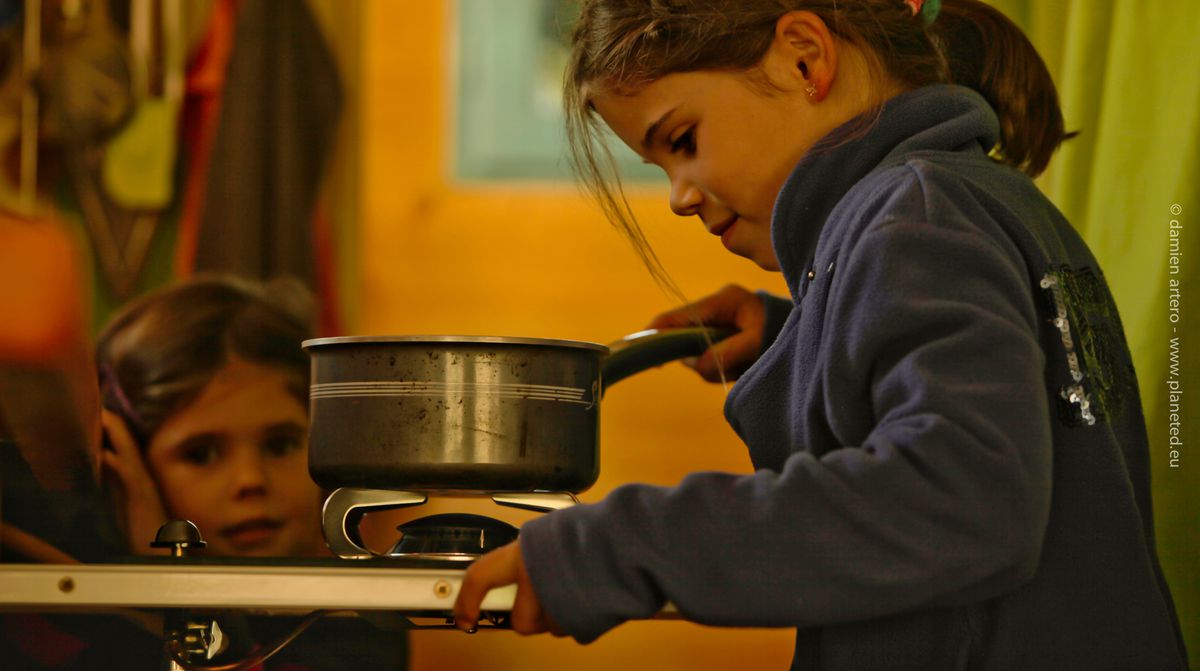 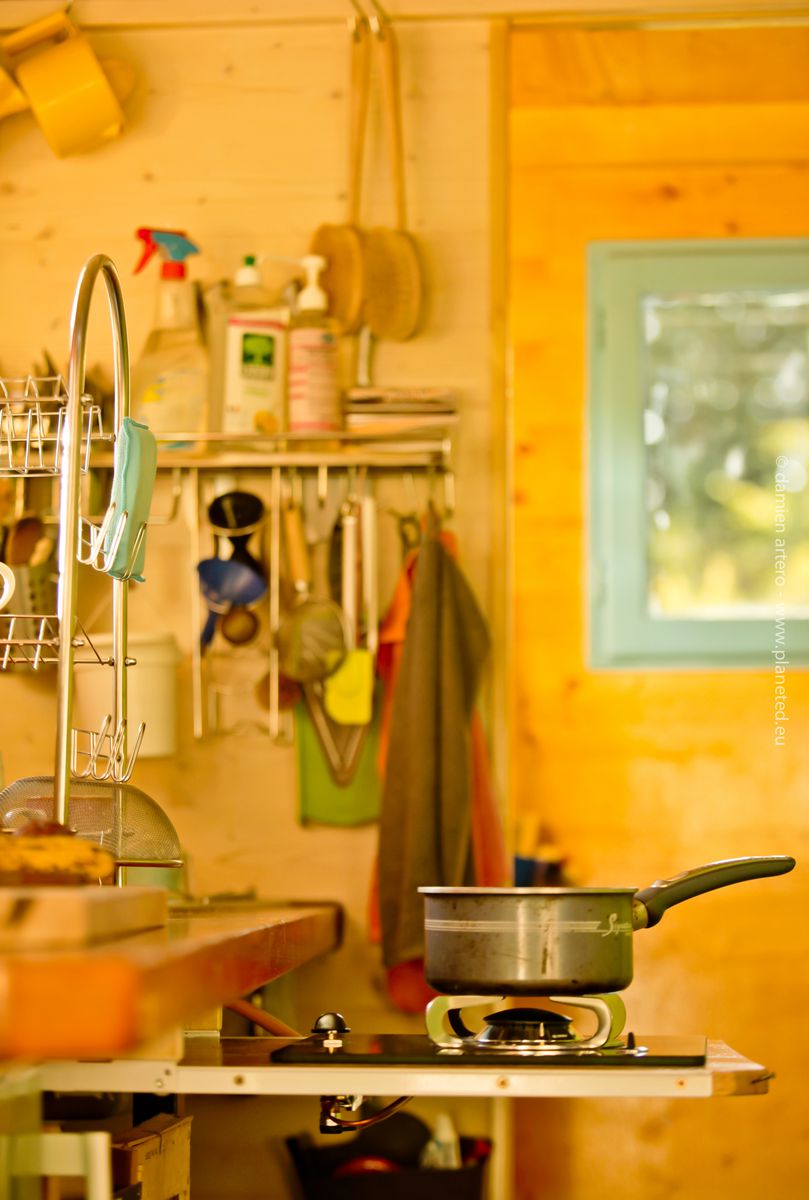 Hardly need it, yes indeed, because we eat a plant-based diet with a maximum of 20% cooked ingredients. But we shall explore that dimension in a future article. Be safe and merry till then and forever. 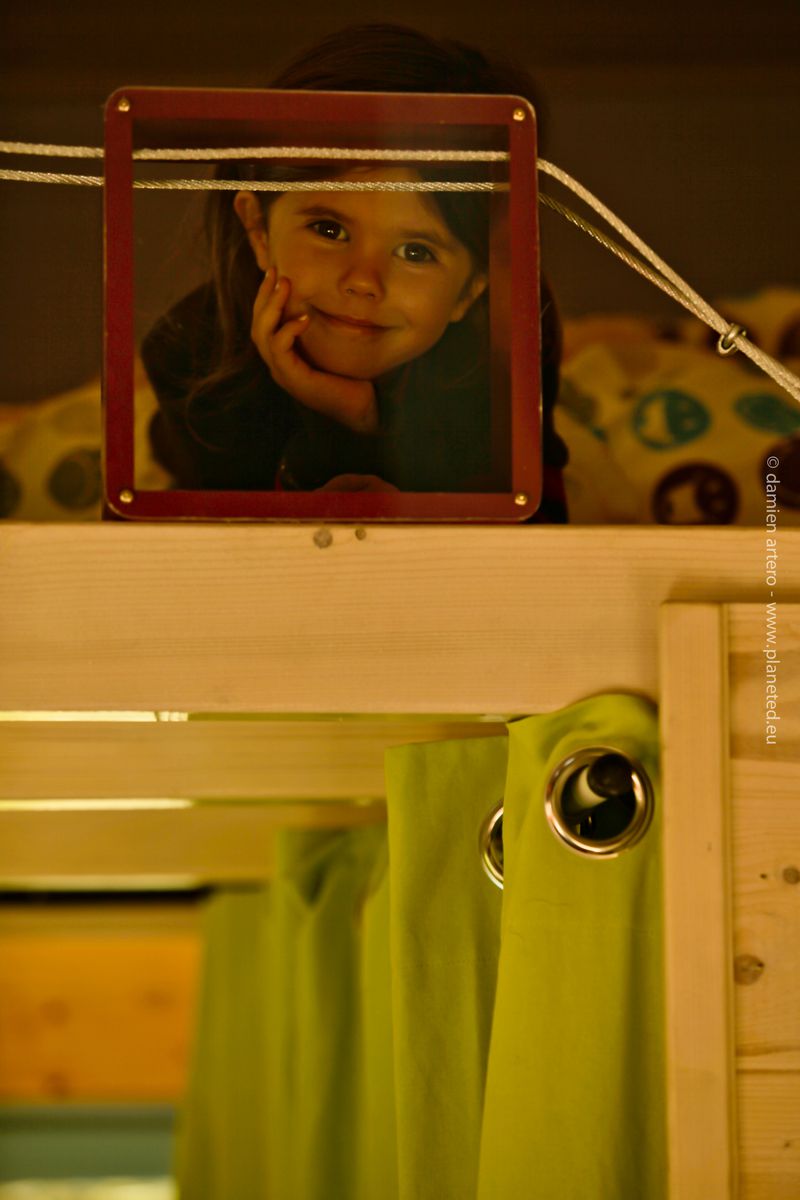 [chapter one: “the outdoors“]